The SSOCM approach to operations change management differs from most other consultancy companies because it is rooted in Systems Thinking. System Thinking has taught us that sustained change in performance requires:

Without systemic change the value and viability of any systematic change, will be undermined and curtailed because of a System’s desire to achieve homeostasis (The property of a system in which variables are regulated so that internal conditions remain stable and relatively constant). Homeostasis explains why:

This aspect of the SSOCM approach to operational change can be simply explained through the story of The Blind Men and The Elephant where six blind men come into contact with an elephant for the first time and because they encounter different aspects of the same elephant they fall into a heated argument as to who was right in describing the big beast, all sticking to their own perception. The argument is resolved by a wise sage who states:

SSOCM believes that too many managers have had the ‘reductionist’ approach to ‘fixing’ problems ingrained into their problem solving practice throughout their education and early careers, and this in turn has lead to the ‘interconnectedness’ of the system in which the problem exists being lost/ignored.

Managers are not confronted with problems that are independent of each other, but with dynamic situations that consist of complex systems of changing problems that interact with each other. I call such situations messes… Managers do not solve problems: they manage messes.”   – Russell Ackoff

In other words, ‘the system will bite back’ and either damped the impact of the initial improvements achieved or cause a new problem to emerge elsewhere.

As a result SSOCM have adopted a ‘Practitioner’ approach to consultancy. 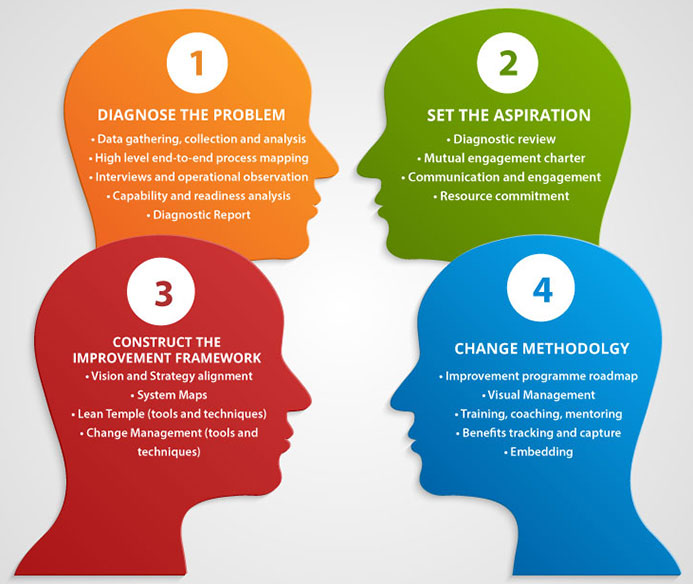 We believe this places continuous learning, for all parties, at the heart of any engagement, and which in turn allays the fears of operational staff that we arrive on site armed with stock answers/solutions/tools! As we impart The SSOCM Practice to our clients, we too hope to enhance our own personal practice and Systems Thinking capabilities (otherwise we would not be practicing what we preach).

SSOCM is driven by its core values of honesty, transparency, learning and dignity, which are reflected in our mantras of:

Leave People and places better off for you having been there”

Our purpose is to:

by combining Systems and Lean Thinking with other improvement and change management techniques.

We are not one of the big four and do not have hidden agendas or try to push third party outsourcing or technology solutions; neither do we have large fixed overheads which necessitate the high fees. When necessary we may suggests one of our Partners with a specialist skill set joins the team but this would always be with the agreement with our client.

If you would like to know more about us please complete the fields below: